January 08, 2012
i took a mickey mouse class my final semester of college, "bird watching and backpacking."

the granola taught about bird calls and minimalisms. i didn't set out to learn anything. i took the class to chill:  name some birds, walk around in the woods. easy a.

years later when i was deep in the desert wilderness of big bend national park, i  remembered a classroom point that i had perviously ignored and discredited. the final few miles included a lengthy climb, and  my lack of fitness and spirit compounded.

i had not practiced, so mine were quite lacking in coordination. at least my mind was distracted from exhaustion. but the idea is to step, in ryhthm, with a slight-slow, pause. regardless, i made it back fine, and we got a hotel that night.

rest requires form. discipline. and contrary to popular belief, it can happen in motion. i believe that rest exists in the created order. that even though the earth is continuosly spinning, in ryhthm, it rests. everything must rest.

Popular posts from this blog 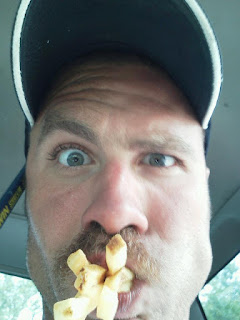 Eric Mertens Celebration of Life
1 Thessalonians 5:16-18: “Be cheerful no matter what; pray all the time; thank God no matter what happens. This is the way God wants you who belong to Christ Jesus to live.”
I have never read that verse at a funeral.And in most instances, I would say that it is boarder line inappropriate.Why would you tell people who are mourning to be “joyful always?”
Here’s why I think that it’s okay to break the rule of thumb.I believe that Eric Mertens, like all people was created in the image of God.This is what the Bible tells us in the very beginning.Among other things, I find our God to be rather clever and sometimes, down right ironic.Like many who truly suffer, I experienced Eric to be a joyful person.He was as playful as a toddler, and at times, as awkward as a puppy.This, I believe is a reflection of God.Our God suffered on the cross, yet remained without hate.Eric who indeed endured, reflects the joy of the creator.
I am more of a Colbert, Conan or Fallon-…
Read more

January 02, 2014
i recently inserted myself into a conversation- turning the attention to the (im)morality of natural state mega-store. or was it to myself? irony defined.

im a fool. not for my ideals, but because i scarred sacred dinner with words more fit for pubs than friends. my apologies. the lasagna was actually fantastic.
ive drank much- from the well of wendell, but ive had little from his table. ive romanticized the farmer, the worker and my own mind.
goliath still wrong. but im not david nor a smooth stone. keep your head down man. work. listen. breathe and please don't talk. instead enjoy seconds.
for the joy comes in the morning.
Read more

March 30, 2018
i am part of the problem
we are within the redemption
great brokenness
and
infinite hope exist together
love will win
Read more